Pre-Revenue Valuation: Is there a method to the madness?

As most founders and investors would know, valuing a company in the pre-revenue stages is far from an exact science. Despite the multitude of theories existing in this space, most of these valuations are done simply as a haphazard negotiation process between the parties involved.

For example, some incubators offer a standard amount like $70k in exchange for 10% of any company going through their program (thus implicitly valuing all their startups at $700k) and some investors make a blind offer such as $250k for 25% of a company – similar to what happens on the popular TV show ‘Shark Tank’.

As can be expected, such valuations are often a sticking point of contention between startup founders and potential investors as each party tries to pull the figures up or down, with guesswork dominating the discussions and scant mechanisms to provide any semblance of certainty.

In major deals, comparators are often used as a benchmark for the valuation (although these can be quite unreliable measures), and in a very famous case Facebook valued Whatsapp using primarily their user count – assigning a value near $40 to each of the app’s appox. 500 million users to reach a figure just under $20 billion.

So then outside the size and prominence of Facebook and the like, is there a method to this madness?

The answer is yes: several tools are used regularly by investors and startup hubs to at least reach a reasonable approximation of a company’s market value in the early stages.   This makes it easier for founders to base their figures on objective parameters and defendable criteria.  Such tools include the Risk Assessment Method and Scorecard Valuation Method.

These methods attempt to narrow down the valuation range by using qualitative metrics which can be back by by both qualitative and quantitative research to assign a responsible/defendable valuation of a startup – things like legal and competitive risks, market size and opportunity, strength of the founding team, quality of the idea and product, stage of prototype development, and any sales contracts in the pipeline if applicable.

By conducting a thorough exercise using several such methods and taking the average valuation, founders can have a good starting point for negotiating with their prospective investors or buyers and have a solid basis to explain how the figures were generated. The exercise itself would also be useful for helping the startup think clearly about its market, research the relevant KPIs in their industry and plan for mitigating any major risks identified in the process.

The virtual accelerator platform eleva8or.com currently offers five of these prominent valuation tools which have been created with a simple slider interface, keeping the sophisticated algorithms and mathematical models out of view for ease of use. Tech founders without a business background would find it rather simple to conduct the exercise by adjusting each model to their assumptions and generating a handy chart of the results (sample shown below); investors could then have a second pass at it to verify and challenge the assumptions as needed. 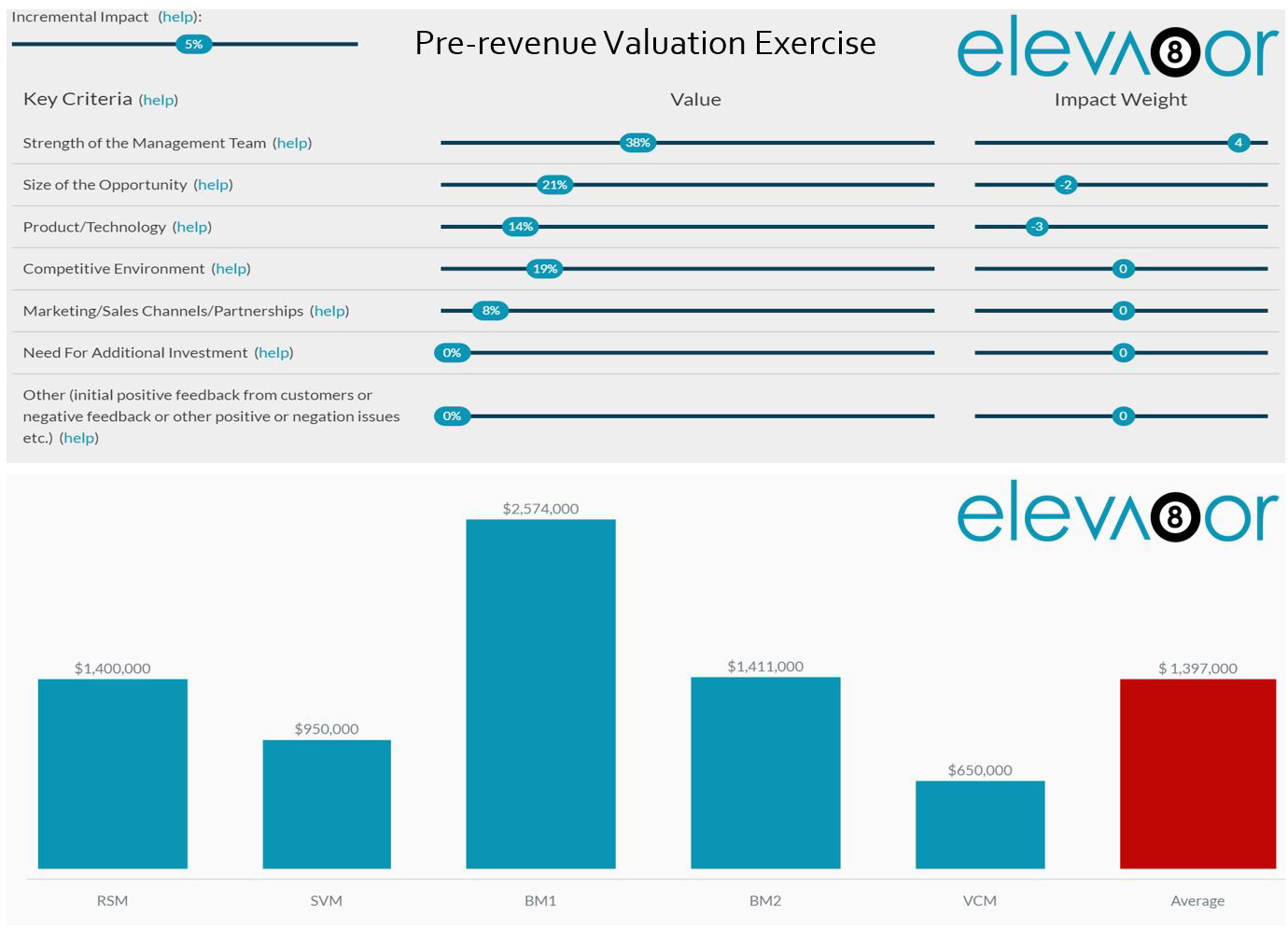